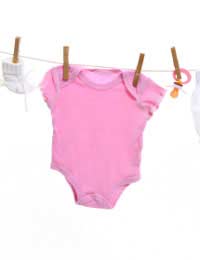 Having a baby can put stress on any household but Fran Richards was surprised to find her third child was the easiest of all.

“It took me a while for my husband to agree to having a third child – eight years in fact! He said he could see no reason for going through all that “baby stuff” again – nappies, endless washing, broken nights, illnesses and days that began at 5am. But I wanted to have another. I don’t know why, but I did.

Our first two children, a boy and then a girl, were born just 18 months apart, and it was hard work. A first child often makes you feel anxious. Suddenly you find yourself a parent and there’s no rule book to follow. With every cry you fear there might be something wrong and you can hardly bear to let them out of your sight.

You get more relaxed by the time 2nd baby comes along

By the time number two comes along you are probably more relaxed about all those things – after all you are more experienced now – but, if they are close together as mine were, you suddenly find yourself with a baby and a toddler to cope with at the same time. No longer are you dealing with nappies, endless washing and broken nights for one small child alone – but you are doing it all twofold.

Don’t get me wrong, I did find time to enjoy my two older children when they were tiny, but it was hard work, and it was very stressful. My husband worked long hours at the time and I didn’t have a car. We have no family living close by to help out and I often felt shattered. Then, after my maternity leave, I went back to work and life became even more of a juggle for a while.

Eight years later, however, it was a different story. By this time, both my husband and I were running our own businesses. We had other stresses to deal with, connected to our work, but when it came to our home lives we had a flexibility we had not enjoyed before. If a child was off school, one of us could work from home. If someone was up all night with an ill child, they could take a few hours to sleep the next day.

So finally he agreed to that baby and we found ourselves with another baby girl. There’s no doubt that any additional child will enhance the stress of a household but our third baby was surprisingly easy.

Looking back, I think this was down to a number of factors. Firstly there was our improved working situation that I have already mentioned. Secondly, I had no toddler to tear around after at the same time and thirdly my older children were relatively independent and also a fantastic help.

For example, while they still needed looking after in some way, they could also do things like find and put on their own clothes, shoes and coats. They could help themselves to drinks and snacks, and would often play in their bedrooms or entertain each other downstairs.

The baby, of course, loved them and would happily chortle away in her chair, watching them as they busied themselves with some project and turned round to talk to her from time to time.

The older children helped out

While I was feeding or changing her they could pass me things, in shops they would hold doors open or stand with the buggy in a clear space - saving me from having to struggle through awkward spaces - and they loved being trusted to cuddle or carry her every so often while I got on with another task.

But it was not just the ease of the practicalities that made life less stressful. I really believe it was my attitude as well. I went into having my third baby thinking “she has to fit in.” I did not want to disrupt life too much for my older ones and did not want them to suffer with less parent time, so it was a case of the baby slotting in to routines we had already established.

When I put her bed, I didn’t worry about getting enough sleep before she woke for a feed. Instead, I told myself that I had done this before and would find time to grab 40 winks at some point during the following day. I didn’t worry about every snuffle, I trusted my own instincts about when to call in the doctor - and with two adults and two children already in the house, the extra washing from a baby was really neither here nor there.

I believe that being more relaxed myself made the baby more relaxed, making her more inclined to gurgle her way through her baby days, happy to have the attention of four doting big people.

I know that is simplistic and people face all sorts of issues with their children that cause dreadful stress but having a third baby after a generous gap worked for me – and has brought great joy to all of us in this family.